Sewing has always been something that has interested and yet eluded me. My background in the stitch arts started with learning how to thread a needle and patch a hole or sew on a button. I learned these very practical lessons from my mother. In high school I took a semester of Home Ec. (do they still teach that??) and half of it was sewing. Many of the other kids in my class had a little experience because their mothers or grandmothers had sewing machines. I felt incredibly intimidated and somewhat lost. I believe our two projects were a sweatshirt and a pair of shorts. Both of which I made a little bit irregular and then refused to wear. My mom, never one to waste anything, wore my frankenoutfit. What a good sport! After that I had no real opportunity or desire to start learning again.

In my twenties I had a brief fascination with knitting and read through the book Stitch 'N Bitch. I tried a few of the lessons but could never get past making the test squares. One part learning curve, one part lack of attention span. Knitting turned out to be therapeutic. I kept my hands and mind busy, focusing on the stitches and could tune-out my stress. Plus, it was a task I could do while watching terrible reality TV -- hello... perfect!

During that magic time during my first mat leave when the kidlet would be down for the night around 7pm, I started researching and learning to hand stitch. I found some easy step-by-step how-to sites.

I bought a bunch of felt from a chain craft store, some needles, good scissors and floss in multiples colours. After a few experiments, I tackled my first project -- a set of soft stacked blocks. 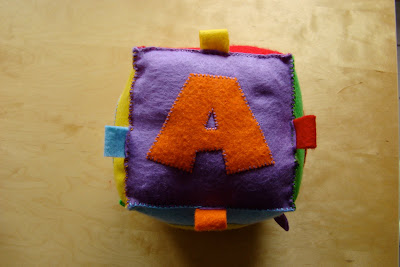 First attempt -- an ABC 123 block
I found a nice, thick font for the numbers and letters, printed them out, traced them onto tracing paper and used that to cut out the sections of felt. I put on a few tags for my daughter's little fingers. [[Sidenote: my first daughter would take any soft toy and turn it around until she could find the tag and then play, explore and chew on the tag until it no longer interested her. She rarely played with the stuffed animal. Now, nearly 3 years later, if she finds a tag she runs up to me and says "Mommy... CLIP IT!"]]

It was a fun project and turned out fairly well. It gave me a big confidence boost to try to make my own softie. I sketched bunnies until I found a shape I liked. I traced, and cut and sewed and stuffed and then gave birth to what I now, lovingly, call FUGLY BUNNY. It didn't turn out all that well, or at least how I wanted it to look. But, hey, learning, practice makes perfect, yadda, yadda. 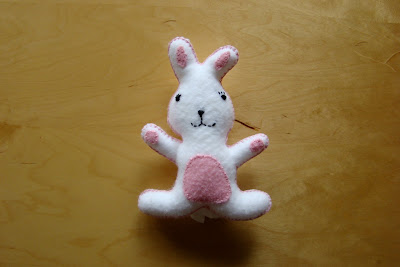 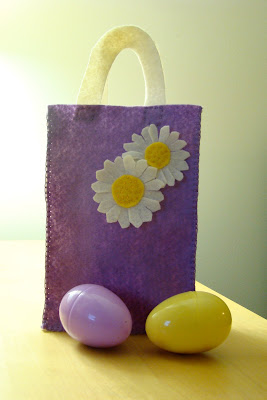 An egg catcher for Easter.
A bit more spare time came my way and I tried a few hearts and a 2D bird with a little embroidery. I like the bird and I discovered that the softies tend to look a bit better if they are not overstuffed. 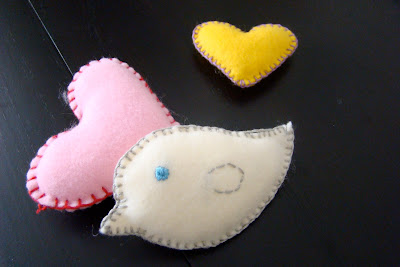 2 hearts & a bird. How tweet.
My daughter was in LOVE with Pandas for quite some time. For her second birthday I decided to make a Panda softie for her. I sketched some options and created a nice template in Illustrator. After completing it I realized I had created a cousin for Fugly Bunny -- Fugly Panda. To save the project, I used an IKEA box frame and created a cute panda and heart background in Illustrator. I printed it and framed it and now instead of a toy, it's an art piece for her bedroom. Thankfully she's not old enough to be critical of my feeble attempts. And yes, Mom, I know my time is coming. 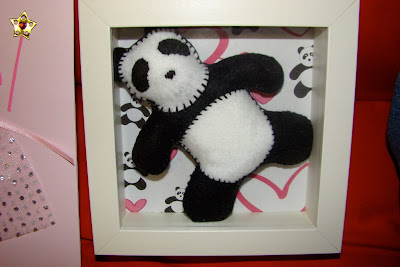 At least Fugly Bunny won't be lonely now that Fugly Panda has arrived.
After another botched creature I realized that I needed a little more help and instruction when it came to creating 3D softies. A great illustration does not necessarily compute into a nice softie. If I had to do a panda again, I think I would make something like the Anna Panda. Reading this tutorial has also taught me to 1) try making softies from one piece and 2) enough with the overstuffing. Really, QUIT IT!

I bought Stitched Toys around Christmas and have yet to try it out. She has some simple projects that could easily be customized by changing the design or colours.

The inexpensive felt from chain craft stores doesn't last through the mauling a toddler can inflict upon it. It pills very quickly because it's not 100% wool. It's a fiber blend. This type of material is great for practice or a piece that won't be touched very often.

I seem to have a real overstuffing problem. No, really.

Insanely sharp scissors make an enormous difference. I remember using safety scissors on felt in elementary school and it still makes my eye twitch in annoyance. I think one could tear felt apart more cleanly than those terrible scissors. All my new scissors have to do is look at the felt and it parts in a clean line.

I like working with felt, embroidery and stitching even if I do make a family of fugly fellows. I hope to continue my (mis)adventures.
Posted by SaylorMade at 7:45 AM 2 comments

My first blog entry ever. This feels a bit intimidating although, really, I think the only people who will be reading this initial post are my husband and mother. Where do I start? I guess I should begin with who I am and what this blog will be about and why I started it.

WHO'S THAT GIRL?
I'd describe myself in many ways. Designer, Wife, Mother, Geek, Queen Procrastinator, Gossip Lover and so on. Unfortunately, I'm not quite cool enough to pull off pink hair, as seen on my avatar. I secretly wish I could.

I've been working as a graphic designer since 1999. While on mat leave with my first child, I found myself yearning to work for myself and to go back to some of my art roots. After I had my second daughter in January of 2010, I decided to work harder to put this plan into action.

WHERE ARE YOU GOING WITH THIS
My intention is to slowly (and with 2 girls under 3, it will be VERY slowly) build up to a point where I will be selling my art and design. This site will be a venue for me to post about my art, past and present. Ideas on design and highlight things and people who inspire me.
Posted by SaylorMade at 10:30 AM 2 comments